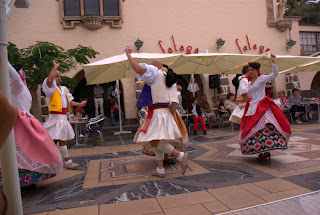 Today is the National Day of the Canary Islands. Ingeborg and I went to Pueblo Canarias, a museum/restaurant complex, where there was going to be traditional dancing and music. It was very nice! Colourful costumes and guitar music, and also some traditional songs which seemed to be well known among the audience! We took lots of photos and videofilms, so we'll try to make a small thing for YouTube again. Tomorrow the shops are closed because of today's celebration, so we'll have to find something else to do instead of the planned provisioning..
Noonsite (a sailors website) reported that a lot of timber logs have been observed in the waters between here and Cape Verde Islands lately, appearantly of unknown origin. We'll have to find out more about this as it would not be nice to run into one of them during the dark night.
Lagt inn av SY Sirius kl. 09:22 Ingen kommentarer:

May month in Las Palmas.

We have enjoyed many weeks in Las Palmas now, but start to look forward to the Atlantic crossing at last! There are always some more preparations you could do, but I think we have covered the most important now. The captain is away for some days, and this trip that came up is the real reason we haven't left already. It has been good to have some quiet weeks for the teenagers aboard also, as there was some studying that had been neglected for some time. Anyway, now Ingeborg has had several tests and seems to have absorbed the curriculum that was scheduled. Thorstein has also had progress on his part, but we need to start a more formalised program for him now.

May month is filled with holidays in Norway, and we have been lucky to find other Norwegians to celebrate them with. Ingeborgs birthday was a success even if the cream cake fell upside down on the cockpit floor.. 17th of May is the National Day of Norway, and we were invited for a party aboard one of the other Norwegian boats. Norwegian food, Grieg music, singing and talking made it a very special day for us.

The weather is getting warmer all the time, but it has not been very hot here in Las Palmas, yet. It has probably been more sunny on the south coast, but we are actually glad for temperatures below 20deg when we go to sleep..

We had a walk in the old city district Veguetas one of the days, and last night Ingeborg and I made a film out of our recordings. Have a look!