We should not be amazed anymore, when things take longer than expected.. Now we are waiting for sails, again. When the mast was stepped we thought the sails were just days away, but that was not the case. They say the instructions from Sailtainer (the rollerboom system), on how to make the sails were wrong. So the mainsail had been cut wrong and had to be resewn! Who's to blame? It doesn't really matter as we are the only part to feel the consequenses. Another two weeks in the marina, two weeks later before we can cross the Atlantic..

It's hard not to be depressed, but on the other hand: Palma has a lot to offer, even in the winter! A wonderful historic city, catedral, museums, a nice promenade in the harbour, restaurants. We still haven't seen more than a small part of it.

Today we have spent a few hours in the museum Es Baluard: the Museum of Modern and Contemporary Art in Palma. There were several exhibitions in addition to their permanent collection. A lot to see, paintings, photography, video, sculptures, some more experimental than others. On Fridays they have decided to let the visitors decide themselves what to pay for the entrance. Sympatic, but I guess that is also why several kindergartens pick Friday as their day to visit the museum. A bit noisy sometimes, yes, but actually the children were very well behaved and didn't disturbe other visitors at all. The museum is only a few years old, and the buildings are a modern complex fitted into the old walls of a castle. The whole bay of Palma can be seen from the rooftop terrace, where there are also sculptures on display. A very nice spot to visit!

On Sunday there will be a concert at the Club Nautico, to raise funds for Haiti. We have decided to go there to support the haitians. It also gives us an opportunity to listen to some live Spanish music. Live music is always appreciated. By the way, there is a Ibsen project on the Theatre Principal of Palma later in February. Hedda Gabler and a Dolls House, I think. We will not wait for it, though, hopefully we have left!
Lagt inn av SY Sirius kl. 05:54 Ingen kommentarer:

I just wanted to update you on our progress. Today the new mast was stepped by the people from Rigging Mar. The mast looks so nice and we hope that everything will work as it should now! The sailmaker from Hood sails came by once we were back in our berth. He will come by Monday morning to take the last measurement when the rig has been tightened. Then the electricians will come to connect all the cables and the rig should be perfect. As soons as the last details on the sails are finished, and a new life-line stanchion is replacing the one that came loose we will be ready to go. I guess it will be next week-end if the weather looks good. 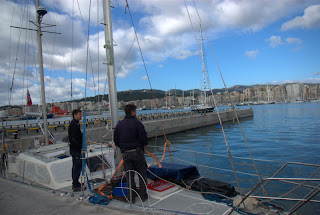 We are setting out for Mallorca

Hi! Today we are leaving Ibiza for Mallorca. It will be great to move the boat, and of course to get a new mast over there. We have been waiting for quite a while now, but we think we have used the time well. Christmas has been relaxed and cosy. We rented a car to see more places on the island. So now we know Ibiza better. The weather has been a lot of rain and wind, but since yesterday it has been quite good. Christmas eve we celebrated home in the boat. With very nice food, presents and a movie. On new years eve, we went to some new English friends over at S/Y Sea-Vagabond. Francesca and Terry. They had also had a scary accident with loosing their steering outside Algerie. We had a great time with music, food and talking. This is all for now, we are leaving very soon. Mom is writing a letter in Norwegian for the webpage, so stay tuned! Now we are looking forward to go to Mallorca, get a new mast and continue our adventure with good luck in 2010!